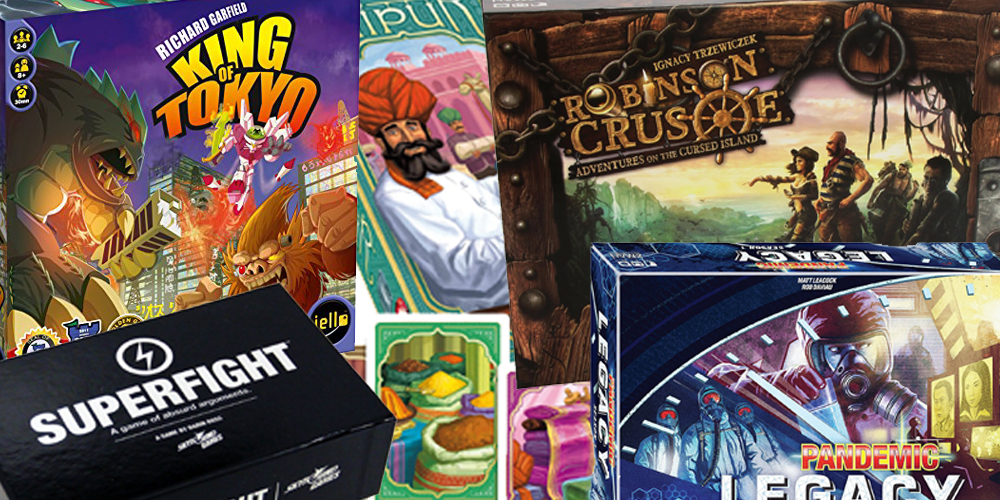 Which games are begging for an app version?

King of Tokyo is a super fun, quick dice based brawl game.  It's essentially Yahtzee with monsters.  Players battle each other in an effort to be crowned King of Tokyo.  Sometimes, lighter games work well as apps. A game like Carcassonne with super quick turns actually works well with the slowed down pace of asynchronous play.  Sometimes you just want to open an app, simulate some dice rolls and attack the heck out of a giant alien with your over-sized gorilla.

Superfight is a game wherein players debate which "fighters" would win in a fight.  In the original, base version of the game seen in the picture we are allowed to choose one white character card from our hand, then use drawn attribute cards from the deck to build an ultimate fighting machine.  Then its time to debate how the fight goes down and choose a winner. How an app developer would like to digitize the debate portion of this game will be interesting.  Superfight lets you argue with your friends about ridiculous fight scenarios, and hopefully no one actually throws a punch.

Robinson Crusoe is a cooperative game which finds the players stranded on a deserted island fighting for survival against the elements, wild animal attacks, and hunger, among other things. The game contains a handful of different scenarios which give it a long shelf life, perfect for an app port. The biggest draw of an app version of this game, however, is how much time it would save you from having to push around chits, cards, cubes, and whatever else. This is a classic example of what somebody might call a "fiddly" game. The underlying game is great, but it can be a chore at times to track everything. We've seen apps be very successful in reducing the bookkeeping aspects of some other fiddly games, we would love to see what an app version of Robinson Crusoe would look like.

Jaipur is a quick two player set collection game. You race your opponent to collect valuable jewels, whoever ends with the most points wins. There are also camels. Two player games tend to work out really well in app form because once you start adding more players, asynchronous play can drag a bit. Two players seems to be the ideal pace if the game plays well with two, lucky for us Jaipur only plays two. Full disclosure on this one, it was recently announced as being in the works from Asmodee Digitial, but that just increases our appetite. The multiplayer is a great fit for an app port, if they add an AI bot of varying difficulty levels, that would be icing on the cake.

Legacy games take the results of your first game and use that to affect the starting conditions for the second game. This continues over the full length of mission/season, with each game building on the last based on your choices, successes, and failures.  It's the cardboard version of watching a season of a thrilling television show, except your group's version of the show will be different from anybody else's because your decisions have a lasting effect. We're honestly not at all sure how this would translate to an app. A lot of the fun and chaos from the physical game comes from literally tearing up the cards as you go through. The season is intended to be played through once, leaving only torn cards and epic tales in its wake. There are a handful of different ways we could see an app port going, but we'd be first in line to try it out should the port become available.

You can find the board game versions on amazon!